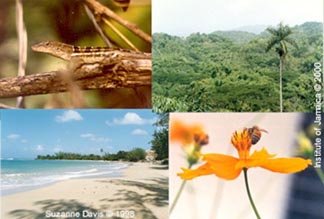 Jamaica is the third largest island of the Caribbean with an area of ~ 11,425 km2. For a relatively small tropical island, it has a remarkable diversity of species and ecosystems. Jamaica has the highest number of endemic birds and plants for any Caribbean island. Furthermore, the high plant endemicity has led to some unique floral compositions in the forests of the Blue and John Crow Mountains and the Cockpit Country. Among the variety of terrestrial, aquatic and marine ecosystems are dry and wet limestone forests, rainforest, riparian woodland, wetlands, caves, rivers, seagrass beds and coral reefs. The global value of Jamaica’s biodiversity is indicated by the number five ranking of its endemic flora amongst islands worldwide.

Biodiversity is an integral part of our daily lives. Yet the level of awareness and recognition of its importance is very low considering the destruction, alteration and pollution of our natural resources. Food, clothes and shelter all come from the components of biodiversity. The different species of crop plants, livestock, fresh water and marine fishes are the sources of agricultural industries. Selective plant and animal breeding enable the cultivation of pathogen-resistant crops or hybrid species which tend to be healthier than the parent stock. Variety in Jamaican craft items such as the straw baskets made from the sisal plant, wicker furniture from the Philodendron plant, leather products and rugs from cow and goat hides depends on the diversity of our flora and fauna. Services provided by the forests including watershed areas which provide groundwater and surface water resources, stabilization of the world’s climate by absorbing solar radiation and prevention of soil erosion are often taken for granted. Other forests like mangrove forests along the coast, act as wave breakers and protect the coastline from storm surges and extensive flooding during storms and hurricanes.

The ways in which different societies define their culture are intimately linked to biodiversity. Our national and local dishes (Ackee and Saltfish), our national bird (Red-billed Streamertail Hummingbird), our national tree (Blue Mahoe), our national flower (Lignum Vitae) and even the name of some countries, are typical examples. The name Jamaica is said to be derived from the Amerindian name ‘Xaymaca’, meaning land of wood and water. Every culture has folk songs and tales which are usually based on the natural history of a country. Then there is folk medicine, still alive among the indigenous peoples of the world and forming the basis for much scientific research and discovery.

It is necessary to identify the components of biodiversity that must be conserved and sustainably used. There are several information gaps for Jamaican biodiversity which can only be met through more inventories and research. In light of the growing concerns that Earth is experiencing rapid increases in species extinction, ecosystems and their components, endangered, threatened, and vulnerable species are priority issues. Past extinctions of species or irreversible habitat destruction serve as reminders to the inevitable consequences of irresponsible or indifferent attitudes towards the care of our biodiversity. Effective conservation of our biological resources is dependent on acquiring the relevant information which leads to a better understanding of our biodiversity, effective management of protected areas, sustainable harvest rates and sustainable uses of biodiversity.

References:
Natural Resources Conservation Authority, Ministry of Environment and Housing. State of the Environment The 1997 Report. 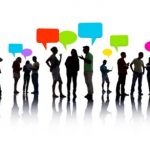 PUBLICATION FOR JANUARY: Sustainability at the crossroads